VANCOUVER, BC, June 13, 2022 /PRNewswire/ -- Silver One Resources Inc. (TSXV: SVE) (OTCQX: SLVRF) (FSE: BRK1) - "Silver One" or the "Company") has identified new targets and continues to expand ground holdings at its flagship property, the past-producing Candelaria Silver Mine in Nevada. Recent and historical work, including geology, rock and soil geochemical sampling, IP and 3D magnetic data modelling, have revealed new exploration targets and expanded previously known targets. As a result, the Company has staked an additional 336 claims in the north and western part of the property (see Figure 1). To date, the Company controls 20,376 acres (8,246 hectares) of patented and Bureau of Land Management ("BLM") ground covering the areas of historic mining, leach pads, new targets and potential along-strike extensions to the known mineralized systems. Silver One is also continuing its metallurgical diamond drilling program in anticipation of an update to the historical resource completed by Silver Standard in 2001 (visit the Company's website at www.silverone.com) and the Company's first economic study.

Greg Crowe, President and CEO of Silver One Resources commented, "The geophysical and geochemical surveys completed by Silver One, in combination with historical data, strongly validate the potential for porphyry-related copper-silver-gold zones beneath and along strike from the known silver oxide mineralization at Candelaria. The implications of this are a significant increase in the potential for the discovery of new mineralized systems at Candelaria. The most promising targets to date occur beneath the two past-producing silver-oxide pits, at Red Hill to the west, and Green Nick to the east. Additionally, an area of identified skarn mineralization occurs both at surface and in recent drilling near the Georgine Pit. These will be assessed in future exploration programs.

The Company also continues to aggressively evaluate the potential for recovery of silver from the historic leach pads and/or in combining this leach pad material with near-surface, fresh mineralization marginal to the past producing open pits. To date, Silver One has completed over 25,000 meters of diamond and reverse circulation drilling. This information, along with the metallurgical information obtained from the ongoing diamond drilling program, will be used in an upcoming resource update and in the Company's first economic study. Additional drilling is also planned to examine the potential for higher-grade oxide and/or sulphide silver mineralization down-dip from both the Northern Belle and Mount Diablo open pits." 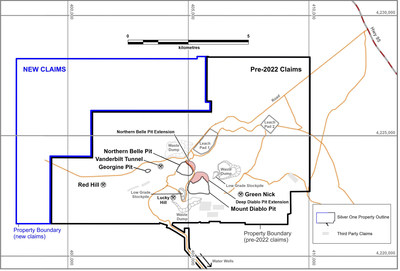 In addition to the reverse circulation (RC) drilling completed in April (see Company's news release of April 25, 2022) and the ongoing core drilling program for metallurgical testing, Silver One has been busy conducting other important surveys at Candelaria. Over the last few months, the company reprocessed, and 3D modeled detailed airborne magnetic data, conducted an induced polarization (IP) survey over the entire extent of the property, and conducted extensive surface sampling as well as expanded geological mapping along highly prospective areas of interest.

Coincidental geophysical anomalies and other geological/geochemical features represent four potentially mineralized areas within the property (Figure 2). These include, in order of priority, the area beneath the past producing open pits, the recently discovered Red Hill copper showings, the area of surface skarn mineralization to the south of the Georgine Pit and the Green Nick showings to the east of the Mount Diablo open pit. All have coincidental IP (Metal Factor) and magnetization vector inversion (MVI) anomalies together with strongly elevated copper, silver and gold in select rocks and/or soil samples. Another area of coincidental, anomalous IP (Metal Factor) and MVI anomalies is located 3 kilometers north of the Georgine pit and comprises deep targets (500-1000 meters depth) under post-mineral volcanic cover. 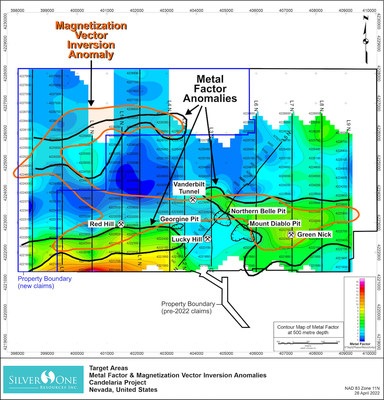 Airborne gradient magnetic data from a detailed survey commissioned by Silver One in 2019 was reprocessed and modeled using Magnetization Vector Inversion (MVI). This process has been effective in mineral exploration and has been especially successful in modelling porphyry copper deposits in the Americas. The technique has been refined and utilized at Candelaria to identify magnetic bodies and alteration areas potentially associated with productive intrusive bodies. It has also been useful in identifying structures which can typically control the silver and other mineralization in the district.

The modelling reveals a series of anomalies interpreted as apophyses (near-surface extensions to potentially mineralized, larger intrusive bodies at depth) and alteration possibly associated with porphyry-style mineralized systems. Depth of these anomalies are interpreted by the geophysical MF and MVI data to vary from near surface (100 m) to over 1,000 meters.

The modelling has also been used to characterize the Candelaria silver-oxide and deeper oxide-sulphide mineralization, which is well known between the Mount Diablo and Northern Belle pits. The identified features have then been utilized to search for similar characteristics elsewhere on the property, revealing anomalies often associated with the top of apophyses and/or margins of interpreted alteration/intrusive zones. These anomalies also form part of the targets shown in Figure 2. MVI anomalies were followed up with additional geophysics and were the focus of the IP surveys that cover the entire property.

An IP survey was conducted to further investigate the magnetic anomalies and revealed strong metal factor (MF) anomalies, (low resistivity and high chargeability) around the Candelaria historical resource area. MF anomalies persist down-dip from the mineralized pits, suggesting continuity of the mineralization beyond the limits of the historic Mount Diablo and Northern Belle pits and beyond the area of Silver One's recent drilling. Despite the fact that the majority of the mineralization mined at Candelaria is oxidized, a strong metal factor anomaly persists around the resource area and may be representative of more sulphide-rich mineralization at depth. Similar MF values continue east and west from the Northern Belle and Diablo pits to the Green Nick prospect to the east, to the area south of the Georgine pit, and to the Red Hill showing to the west of the pits (see Figure 2).

Extensive (over 1300 samples) surface rock and soil sampling conducted by Silver One and SSR reveal several clusters of high silver, gold, copper and other trace elements which delineate significant anomalies. These anomalies, in combination with coinciding geophysical anomalies, are considered promising drilling targets (Fig. 2, 3, 4, and 5).

Around the historic pits, the surface assays have expanded the footprint of the mineralization about a kilometer east and west of the Mt. Diablo and Northern Belle pits, and around 400 meters west of Georgine pit. Additionally, Silver One's recently completed 7,500 m reverse circulation drilling has visually further expanded the area of the historic resource mineralization 300 meters east of the Mt. Diablo pit. The total expansion gained with all Silver One's drilling to date is approximately 500 meters west and 400 meters east of the Mt. Diablo pit. Assays from the 7,500 program are pending. 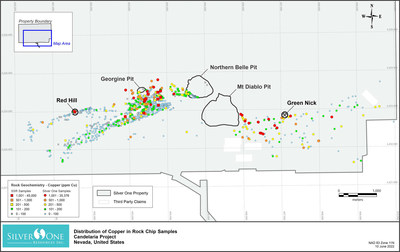 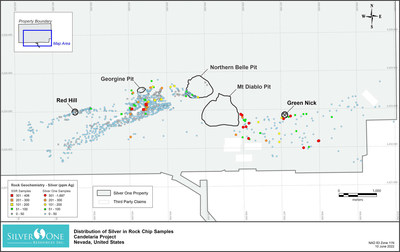 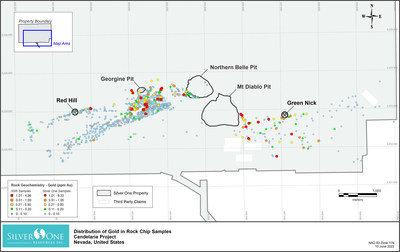 Grab and chip samples collected by Silver One varied from 1 kg to 5 kg and were assayed by American Assay Laboratories ("AAL") in Sparks, NV, USA (ISO accredited Laboratory, ISO/IEC 17025:2017). Samples were analyzed for thirty-seven elements by ICP-MS. Over limit copper, lead and zinc were analyzed by ore-grade volumetric analysis.  Silver One inserted commercial standard and blanks in the sample batches.  AAL inserts blanks, standards and includes duplicate analyses to ensure proper sample preparation and equipment calibration.

Candelaria was historically the highest-grade silver producer in the state of Nevada, averaging over 1,250 g/t AgEq (40 oz/ton AgEq) from high-grade vein mining between the mid-1800s and the mid-1900s.  Open pit mining operations were undertaken in the 1970s through 1998 by several companies, including Nerco Inc. and Kinross Gold Corporation ("Kinross").  Kinross closed the open pit and leach operation in 1998 due to low silver prices.  Leaching of the historic pads was not fully completed, leaving a substantial amount of silver unprocessed.  It is estimated that the property has produced over 68 million ounces of silver.  Historical information was obtained from "Geology of the Candelaria Mining District, Mineral County, Nevada, 1959, Nevada Bureau of Mines, Bulletin 56", and the 2001 SSR Mining Inc. technical report titled "Candelaria Project".

Qualified Person The technical content of this news release has been reviewed and approved by Robert M. Cann, P. Geo, and a Qualified Person as defined by National Instrument 43-101.

Silver One is focused on the exploration and development of quality silver projects.  The Company holds an option to acquire a 100%-interest in its flagship project, the past-producing Candelaria Mine located in Nevada.  Potential reprocessing of silver from the historic leach pads at Candelaria provides an opportunity for possible near-term production.  Additional opportunities lie in previously identified high-grade silver intercepts down-dip and potentially increasing the substantive silver mineralization along-strike from the two past-producing open pits.

The Company has staked 636 lode claims and entered into a Lease/Purchase Agreement to acquire five patented claims on its Cherokee project located in Lincoln County, Nevada, host to multiple silver-copper-gold vein systems, traced to date for over 11 km along-strike.

Information set forth in this news release contains forward-looking statements that are based on assumptions as of the date of this news release. These statements reflect management's current estimates, beliefs, intentions and expectations. They are not guarantees of future performance. Silver One cautions that all forward-looking statements are inherently uncertain, and that actual performance may be affected by a number of material factors, many of which are beyond Silver One's control. Such factors include, among other things: risks and uncertainties relating to Silver One's limited operating history, ability to obtain sufficient financing to carry out its exploration and development objectives on the Candelaria Project, obtaining the necessary permits to carry out its activities and the need to comply with environmental and governmental regulations. Accordingly, actual and future events, conditions and results may differ materially from the estimates, beliefs, intentions and expectations expressed or implied in the forward-looking information. Except as required under applicable securities legislation, Silver One undertakes no obligation to publicly update or revise forward-looking information.