Lamborghini is set to compete at the top level of endurance racing by 2024, with an entry in the premier classes of the IMSA SportsCar Championship and FIA World Endurance Championship—GTP and Hypercar, respectively.

Both classes are open to new LMDh race cars as well as those built to existing LMH rules, and the former is Lamborghini’s weapon of choice. Following an initial tease in May, Lamborghini on Monday released a new teaser for its LMDh race car and confirmed the first specs.

Lamborghini’s LMDh will run a V-8 hybrid powertrain, with the V-8 to be a new twin-turbo unit developed by the automaker’s Squadra Corse racing arm, though one thought to be related to the twin-turbo 4.0-liter V-8 fitted in Lamborghini’s Urus SUV. The hybrid component will be a single motor-generator integrated with a 7-speed transmission.

In line with LMDh regulations, the powertrain can generate at any time a maximum output of around 670 hp from both power sources. Other specs include a top speed of 211 mph and a minimum weight of 2,270 lb without the fuel and driver.

To ensure even competition between the LMDh and LMH cars, the organizers have decided to implement Balance of Performance rules. But unlike LMH, which requires bespoke entries, LMDh has been developed with a view of keeping a lid on costs, so teams need to use a spec chassis similar to a current LMP2 chassis, sourced from one of four suppliers: Dallara, Ligier, Multimatic, and Oreca. 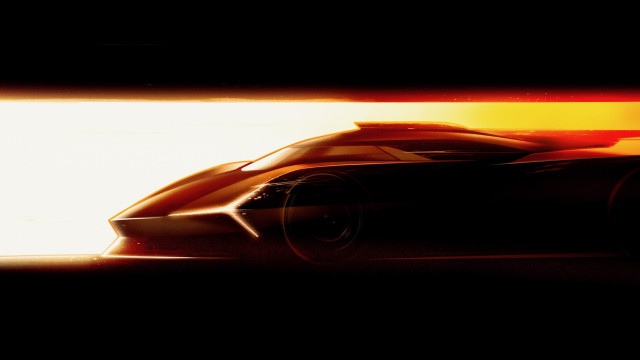 Lamborghini has chosen a chassis from Ligier, due to the design’s flexibility, the automaker said. Fellow Volkswagen Group brand Porsche is developing its own LMDh race car due to start racing in 2023, and has chosen Multimatic as its chassis supplier.

Lamborghini in July also named Andrea Caldarelli and Mirko Bortolotti as its first two drivers for the LMDh program.

The first race for Lamborghini’s LMDh will likely be the 2024 24 Hours of Daytona, the race that serves as the opening round of the SportsCar Championship.

Acura, Alpine, BMW, and Cadillac are also committed to LMDh, while ByKolles, Ferrari, Glickenhaus, Peugeot, and Toyota are all committed to LMH. Audi was also set to join LMDh in 2023 but in August announced it had canceled the effort to focus resources on a planned Formula 1 entry in 2026.

News of the V-8 hybrid powertrain comes just as rumors surface that Lamborghini is planning a twin-turbo V-8 in hybrid configuration for its HuracaÌn successor due by the end of 2024. Such a powertrain is also expected to feature in the Urus.

What you need to know for post-storm cleanup

Community comes together at restaurant to ride out …

This is the wealthiest person in Georgia, according …

Georgia Senate Debate to be closed to public

Baby boy surrendered 1 day after being born under …

SC Gov issues state of emergency ahead of Ian